This is an older review, however, revisiting the toy recently has confirmed everything I originally thought and wrote about it....

Enjoy! I certainly have been!


As a sex toy reviewer it is very rare that I see something new and exciting. Yes toys are improving day by day with new materials, better buzz settings and charging options etc, but, when it comes to design, mostly it's a bit same old same old when going through the range. This is why, when I first saw the Jimmy Jane Form 2 on a website, I knew it was one I had to try one to see if what I was seeing was actually as good as it looked.

Let me first say yes. It absolutely was. Now, let me explain:

One of the most popular selling sex toys ever is The Rabbit. Almost every toy company has one in their range and, as much as I always enjoyed the rabbit part of them, I never really used the main part. This then became an issue of having a bulky phallic toy attached to the buzzy clitoral stimulation of the rabbit ears (or penguin beak or dolphin nose or whatever cutesy critter was amimal-of-the-month on these types of toys) and just seemed like a waste. I've found a few little “just rabbit” toys around the place but mostly they were flimsy and lacked any kind of power and were a bit of a let down. Since then, however, the designers of Jimmy Jane Form 2 seem to have read my thoughts and have created a toy that is essentially just the rabbit but with the feel and power of a proper clitoral vibrator.

The shape is a bit like a fat tuning fork with a small palm-sized body and two prongs and is made of silky phthalate-free silicone (with a stainless steel base where it's charged).

It has four different vibration settings, five levels of power and two (one in each prong) motors which, for such a small toy, gives it a real advantage in power. The pulses and vibrations are all pretty good; waves, beats, shakes and buzzes, and work together inside the prongs to give maximum sensation to your bits. Some of the pulses are in stereo (meaning each ear vibrates at the same speed and time) and in other settings they vary a bit, allowing a multitude of sensations to flutter and buzz against you.

Another interesting and unique thing about this toy is that while yes, you can hold it so that one of the prongs is directly on your clitoris, that's not the primary way this toy is supposed to be used. You see, what a lot of people don't know is that the nerves of the clitoris fan out from their central point and the unique design of the ears allows this toy to use those outer nerve endings to stimulate orgasm. In my opinion this doesn't minimise sensation (although it is a bit different), but it can be great for girls who find right-on-the-clit buzzes to be a bit too much. It can also be used in a similar way around the nipple and areola.

It is completely waterproof, so you can use it in the shower or bath and is also fully rechargeable with a little dock/stand to sit it in which is a bit like a iPod. The setting on the charge stand is quite sensitive, so if you accidentally knock it or don't place it properly on the dock it stops charging. It only takes about two hours to fully charge and then lasts around seven hours before you need to re-dock it. Simple warm water or a toy cleaner will get it ready for your next use and it also comes with a three year limited warranty.

This really is a great new and unique toy that makes me happy and satisfied and full of hope that the toy industry is not going stale and that there are always new idea to find. 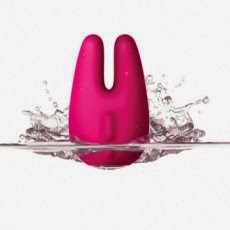 Posted by Deliciously Bad at 00:32