Your Tattoos Don't Make You A Bad Mother... But Your Lack Of Humour Makes You An Idiot


I am always amazed at the depths of human stupidity. I shouldn't be. I mean, I've been hanging around the internet since long before it was cool to do so, (yes, I was one of those creepy weirdos in html chat-rooms in the 90s when LOL still meant Lots Of Love and FTW was Fuck The World... But I digress..), and there were idiots and dumbfucks around back then, but oh wow, as the internet grows, so does the gene pool seem to shallow.

When I'm bored or procrastinating one of my favourite things to look up are satirical pages that make fun of the news or religion or social constructs. They are brilliant and clever and often say a lot more about society than actual real news... But they've also shown me a side to society that, quite frankly, embarrasses the hell out of me.

At first I thought it was just a small handful of people who thought articles from The Onion were real or who got angry at pictures that claim “injecting three whole marijuanas gives you the gay” (I mean come on, guys, seriously.) but I have since, in my almost obsessive desire to eat up and enjoy pages and jokes like this, realised that, as Einstein once said, “Two things are infinite: the universe and human stupidity; and I'm not sure about the universe”.

Some people... A hell of a lot of people actually... really don't get satire. At all. They see exactly and only what they see. They cannot read between lines, understand irony or comprehend sarcasm. They also often do not read beyond a headline or precede and then make up their mind and opinion based on that alone and, most often, their mind and opinion is one of indignant offence. Or, what the internet refers to as "Butthurt".

Some of my favourite pages in which to observe this butthurt in its natural habitat have included Christwire.com, Christians Against Slipknot and Mrs Betty Bowers: America's Best Christian. But over the last week or so I have noticed a new contender step into the ring. A page that has caused more outrage and butthurt than that time Kanye took the mic off TayTay. This brilliant page and social experiment is titled “Your Tattoos Make You A Horrible Mother” and it has almost completely overtaken my Facebook time (which, if you know me, is quite a lot of time indeed)
“Dr Ronald Winters” is the owner of the page and he and his good wife “Magda” are on a mission to save the world's children from the threat of fetal poisoning from “Teratogens” in tattoo ink. If you're not up on medical lingo, a teratogen is a toxin that can infiltrate into your uterus and have severe medical effects on your unborn child.

According to the Good Doctor Winters' "research" the teratogens in tattoo ink seep into your uterus and give your child "Fetal Ink Syndrome" (FIS) and "Tattoo Induced Toxemia" (TIT) which turns your child into a drug addicted skank with no future. Two of my favourite pics that the good doctor has posted to support his claim are one of a child in an oven with the caption “This Is Your Uterus On Ink” and another with a little boy resting his head on his mother's pregnant belly thanking her for being inkless and saving his baby sister from becoming a skank.

I know. It's ridiculous right! How could anyone actually think this is real? I mean FISTIT for fuck's sake!!! It's so obviously a pisstake!

Enter the butthurt. Holy fuckballs, Batman. It's hilarious. Hundreds and hundreds of tattooed parents are screeching out of the woodwork on their offended little high horses, defending their rights to have tattoos, demanding the "doctor" to show his credentials and qualifications and research, telling the page in their outraged indignation how wonderfully smart and gifted and settled their kids are or how their mothers had tattoos and they turned out just fine!

But probably the most telling, albeit depressing, example of how people act when they are "offended" is something that the internet shows in spades. Hate. Angry, vitriolic, unashamed, horrible hate. The modern day cyber equivalent of the angry mob with pitchforks and torches descending on the "monster". No thought, no control, nothing but unbridled, blind hate. Threats of violence, insults and, of course, that last bastion of the "offended interneter", the wishes for rape and awful things to happen to your children. Because it's not okay for a guy to make photoshopped pictures and outlandish claims, but it's perfectly okay to wish his children to know the pain of forced anal rape... So says the logic of these unthinking, hate-filled masses...
Yes, in a bittersweet twist of deliciously frustrating (and to be honest rather frightening) irony, the offended posters are acting like revolting, horrible skanky idiots to try and prove, with mostly terrible spelling and awful grammar, that people with tattoos are not revolting, horrible skanky idiots and, as you will see, failing miserably.

Now of COURSE I know this latter statement isn't true. I myself am a tattooed mother and so are many of my friends and mostly we're only a little bit skanky (mostly), but I am going to show you a couple of examples of why I find the irony of this page a delicious treat of goodness as well as a rather depressing insight into the butthurt psychology. I will admit I have been on there and had some fun defending the “good doctor's” work (for eg “I support this page because my friend's baby was born addicted to the marijuana needle and, at only four days old, had to take four whole marijuanas every day just to survive!!”) and the beautifully articulate comment from “Bubba” that I have added below will show you an example of the replies I got... I got a lot. Mostly like that... Le sigh.
The rest... Well, I'll let them speak for themselves. 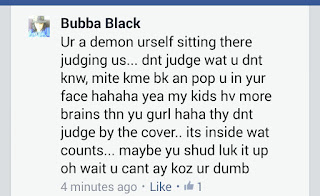 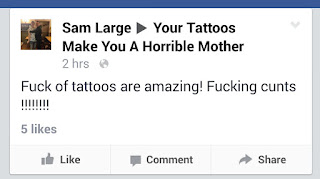 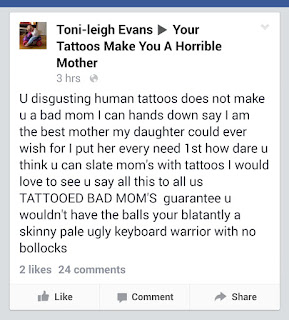 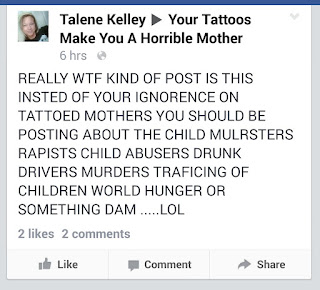 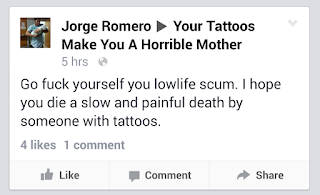 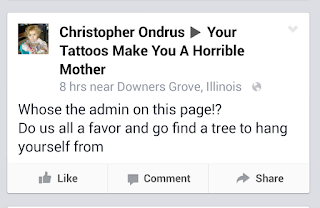 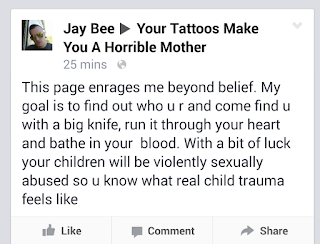 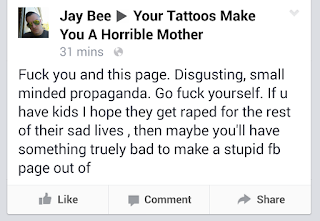 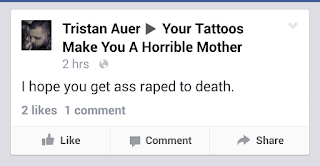 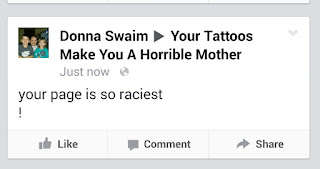 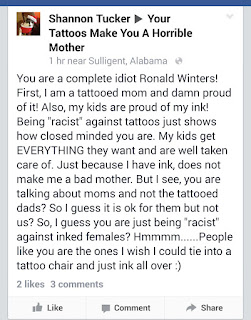 Humans of the world, I urge you. Please never ever become one of these people. If something offends you there are so many many different ways in which to deal with it other than screaming rancid hate.
I am fairly sure, considering you are all awesome readers of my blog, that your intelligence levels are far higher than some of these people but just in case you may have an inkling to defend the ink, stop. Breathe. Have a giggle and shake your head and thank the good Goddess of humour that you're not a fuckwit...
Posted by Deliciously Bad at 18:17