I have to admit, I have been rather curious about this toy since the first time I saw it, but not in the way I am normally “curious” about new toys. Sometimes I see one in a shop or a picture and think “I have to try this! It looks amazing!” But this time I was more on the side of “How is this possibly going to work? It looks so bulky and awkward! I need to try this and see if it works!” So, when I was asked to review, it I jumped at the chance to see what was what and if my trepidation was legitimate.

I have reviewed other Lelo toys before and I have to say, they are a blend of hit and miss. Most of their solo toys are fun and user friendly, with a few issues here and there, but their couples toys always seem to miss the mark. This one, the Ida, falls into the miss category in quite a few ways and makes some of the problems I've had with their other couples toys seem insignificant.

Like all Lelo toys, it looks rather elegant. The rich magenta colour of the toy, with it's glinting gold base, is luxurious looking as is the simple black box it arrives in. But that's about where the luxury ends. The toy is made of a hard silicone and resembles those hooks you get on the back of doors to hang your bag or towel on. The hook part of the toy is bendy and flexible (Although the actual material isn't) and is inserted into the vagina, and the base rests against the outside and is used as a clitoral stimulator. It comes with Lelo's custom remote control that works with either the pushing of buttons or the sense-motion technology they use which means, depending on which way you hold it in your hand and turn and move it, it changes changes the way the toy moves and vibrates. This has always confused me and other partners, but it can be fun trying to figure it all out.

The main thought that has gone through my head when looking at pictures and then finally having it in my hand to play with and feel, is that the insertable bit is too big. I say too big because it's a couples toy and you're also supposed to accommodate a penis inside yourself too while this thing spins and buzzes. But again, I decided to wait and try it before drawing any definite conclusions. After all, I am a girl who doesn't mind that “full up” feeling, and the vagina is a remarkably stretchy and flexible part of the body (It can push babies out of it!).

So, onto the testing. During foreplay my partner and I played around with the toy, using the hook end to stimulate the clitoris and also push inside, and I have to say, it was a bit crap. The buzzes weren't all that strong and, when inserted, it was a bit hard to feel the thing actually moving. I was also distracted and put off by the noise. This really is one noisy toy. Other toys I have had that are this loud are at least accompanied by a strong vibration to match the noise levels, but this one was just loud. We decided it was time to try out the main function, which is of course the fact that it's a couples toy, and so, with the toy inserted, my partner went to join it.

To say it was a tight fit is being kind. Yes, my partner is rather well endowed (no bragging, just saying) but even if he wasn't I can imagine it being uncomfortable to fit something else inside when this is there and, even with his penis pushing against it, I still couldn't really feel the rotation function of the toy.

The base part was buzzing okay on my clitoris but I kept having to shift around to get it in the right spot, which actually physically hurt. I put this down to a few of things. One, the material is hard and kind of bashed against me. Two, the insert part is too big. And three, maybe it was just the position we were in. So we changed to see if it felt better from behind.

It didn't. It actually felt worse. I asked my partner how he was feeling and he said it was uncomfortable to the point of being almost painful. He said the hard material against his penis was off-putting and the tightness was not the “good kind of tightness”. He actually said, and I quote, “It's like a horrible hard rod pushing and scraping on my cock.”

The toy comes with a little booklet full of tips and diagrams on how to best use it and we tried pretty much all of the positions. None of them felt any good. They all just felt tight and hard and uncomfortable for both of us and I have to say I was really, really disappointed. Even though I hadn't had high expectations, I hadn't expected the thing to be as painful as it was and it really kind of ruined the experience for both of us.

I honestly think the main problem with this toy is the material it is made from. If it was soft and squishy (with a more powerful motor and less noise) I can actually see it working in the way they are trying, but the way it is, I honestly would not recommend it to anyone. There are far better couples toys out there on the market and, considering how much most of them cost, I personally think this one is a complete rip off.

Sorry, Lelo, this toy gets a 2/10 from me. And that's being generous and mostly because I like the colour and can see potential if certain things are changed. 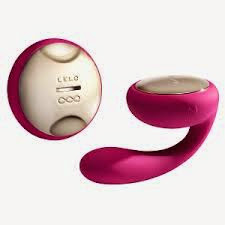 Posted by Deliciously Bad at 16:11