I really like We-Vibes. I have tried, tested and reviewed quite a few of their products (you can read some of them, as well as loads of other sex-based stuff I write, here yes click it it's a link ) and have always enjoyed them, especially their couples toys. I will admit that some of the earlier versions  had some issues with certain usability factors but they were still fun and enjoyable and, as each update came along, those issues were sorted out to make it better and better. And now we have come to the 4.

The We-Vibe 4 is different to the others in a few ways. The first being the material it is made out of. Gone is the slick, shiny silicone which, especially when all lubed up, had a tendency to move about a bit and lose it's hold. It's been replaced with a more matte silicone that is smooth and velvety to the touch and doesn't get anywhere near as slippery. They have also changed the size and shape a bit. The toy itself is smaller and the insertable end isn't as bulbous as the previous ones, but still manages to hit the spot like the We-Vibe III did.

The vibrations also seem to have improved with more intensity to the buzzes and, although there are a few differences to the pulse patterns, all six of the settings are good and suitable for everyone's  different preferences of strength and vibration.

The remote is a bit different too. Where as on the III there was just one button to push through the modes, the We-Vibe 4 has four easy to use buttons that can increase the intensity (up for more, down for less and to turn off) and change back and forth (side to side) through the settings so you don't always have to go right through the whole sequence to get back to the one you like best.

To use it all you have to do to turn it on is push down the little button on the front end of the toy for about two seconds and then either push through that to get to the sequence and intensity you like, or use the remote. Just hold the remote next to the toy and press the top button down for a few seconds and it syncs up. If you need to, use a bit of lube (always use a water-based lubricant with toys as some silicone ones can damage the material) to insert the smaller end and then the larger end rests nicely against your clitoris. It can be a great toy to use solo, but as a couples toy, it really comes into its own when your partner slides in next to it. The G-Spot is stimulated, the clitoris is stimulated and the penis is as well. My partner really enjoyed it. He said the material felt nice and the inserted part was not distracting or in the way at all and the vibrations were “sensational”. It really is a great toy for everyone!

The remote control (which comes with a lithium coin cell battery) has a range of around three metres and, because the toy has a really quiet motor, it could be a fun thing to take out on a naughty dinner date or shopping trip. The new, less slippery silicone, means that it won't slide around too much if you're standing or walking and the remote is small and discrete enough for your partner to put in their pocket and push at their discretion.

It's fully waterproof (not the remote though) and really easy to clean with a good toy cleaner or antibacterial soap, and it comes with a stand to sit in while it charges. It charges via usb, which can be a bit tricky if your computers are in a part of the house that other people use, but a converter plug is cheap and easy and then you can charge it wherever you like.

All in all this new version of the We-Vibe is a real winner and I think the only thing they could maybe do to improve on it (We-Vibe 5 perhaps) would be a feature where you could have the two motors able to be doing different pulses and sequences at the same time, to really maximise enjoyment and buzz-ability.

I give this new version a 9/10 and think it is definitely an upgrade We-Vibe lovers will enjoy. 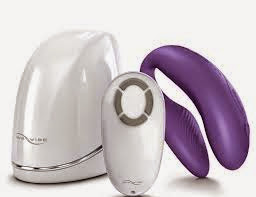 After first publishing this I have become made aware of the newest We-Vibe upgrade which will be hitting our shelves sometime in the next month or so: The We-Vibe 4 Plus. This is pretty much the same as the We-Vibe 4, but it can be controlled via a smart-phone app... From anywhere IN THE WORLD!!!


Needless to say... I WANT ONE!
Will Keep you all posted. Until then...
Happy Buzzing, my friends!


UPDATE!! OMG I am so so excited to announce I will be reviewing some amazing new products for the awesome crew at Sex Toys 247 (It's a link! Click it!!) First one will be a We-Vibe 4+
See! Dreams do come true!!

Posted by Deliciously Bad at 22:44