Things are often misunderstood on the internet. It's like its “thing”. Sarcasm is misread, words taken the wrong way, things taken out of context. It happens every day. Hell, it even makes the news if someone has gaffed on Twitter. The public reacts, the outrage swells, the original poster usually either apologises for the misunderstanding, or goes into defensive mode and attacks back. Words are spoken, delete buttons are pushed and people forget and move on to the next gaffe.
I spend a lot of time online. I see these things happen all the time. Sometimes they're big, sometimes they're small. Sometimes I sit back and watch it unfold, other times, especially when it's a topic I feel very strongly about, I will make a comment.
This happened last night on a Facebook account I follow and enjoy. A comment was made and the public reacted. And then a really, well, actually kind of depressing thing happened.
Let me explain from the start.

I Bet This Turkey Can get More Fans Than NOM is a great little pocket of the internet universe. It was created by a guy who was fighting against National Organisation of Marriage – You know, that bunch of whackjobs from America who use “the sanctity of marriage” as a front for blatant homophobia. He wanted to see if he (or his turkey picture) could get more Facebook likes than them. He did. And also succeeded in becoming a popular page for LGBTI rights. I enjoy it thoroughly. I always trawl through there and read the posts and the articles. The guy who runs it is funny and and often posts up his reactions to homophobic messages he gets which are always hilarious and well constructed sarcasm and mirth at the idiot who has posted.

Last night something happened and I'm actually so pissed about it it's already ruined my morning.
The Turkey posted a link to a news story in which everyone's favourite pure Christian, Josh Duggar, had been outed by a sex worker/adult star as having paid her to sleep with him. She mentioned he was frightening, terrifying even, and that he had been rough and abusive in both his actions and his words.
Now I know why the Turkey posted this. Duggar is a guy who holds himself up as a beacon of purity and Godliness. He is completely homophobic and anti equal marriage, despite recently being charged with the sexual molestation of a number of young girls (including his own sisters), outed as a frequent Ashley Madison user, and now this story of sex workers and rough sex. For activists all around the world who have a hand in fighting for equal rights (myself included) its a gold mine. It truly is. The word hypocrite has been used more times than when Tony Abbott opens his mouth on just about anything, but I digress.
The Turkey posted up this article titled “Porn Star says she had terrifying rough sex twice with Josh Duggar”and captioned it with this comment: “Something tells me that his wife should be getting an STD check asap.”
Completely ignoring the fact that this woman had a terrifying experience. Completely ignoring the fact that fucking porn stars is probably not the thing that good, pure Christians for the sanctity of marriage should be doing. Completely ignoring the fact that this piece of badly written “journalism”came from the Daily Mail which is known for its sensationalism and gossip-mongering. Nope. Forget that shit. Let's make a tired and boring old joke about dirty dirty sex workers and their disease riddled bodies. Ew!!
Almost every single comment underneath it said similar to my above comment. People taking task to the fact that not only had this woman been treated so appallingly, but also the actual fact that sex workers have probably the lowest number of STIs in any demographic because of the rigorous testing and protection and prevention steps they take.
I was upset. I was disappointed. I wanted the Turkey to understand that his comment was not only unnecessary, but also hurtful and contributing to the rampant whorephobia that I see and encounter every day. Not so much towards myself any more, but towards sex workers in general. To my friends and colleagues. Hell, the whole Amnesty thing recently brought out whorephobia to the public eye and wow, was it unpleasant and nasty to view.
So I wrote him a comment. I wasn't rude. I wasn't even angry. I was disappointed. This is my comment. (I would screenshot... But...)

"Wow Turkey. What a whorephobic, uneducated comment. Sex workers and adult film stars have some of the lowest rates of STIs.
Pretty sure you of all people know the harm and pain and hatred that stigma and uninformed asides can make. It's the whole reason you set up this page. To stand up against hate speech and people spreading bullshit propaganda and lies and reinforcing that in the eyes of some, others are less equal. This time it's her job not her sexuality that's being shamed. Not cool, Turkey.
Don't be that guy."


I wanted him to realise that his words have consequences and that he of all people should understand those consequences. That hatred and misinformation spread by ignorance do so much damage. That stigma hurts. The thing is he KNOWS this. He's lived it. It's the whole reason the Turkey page was created! But for some reason, and it happens all the time, when it comes to being insulting to an entire demographic of people, it's totally okay if it's sex workers. We are lesser humans in the eyes of people. No matter what minority you're part of, at least you're not a dirty, disease riddled sex worker. Hey! You molest your sisters and cheat on your wife and frighten women... But at least you're not a whore! Let's focus on the whore! We can make fun of her! Why not! She's just a whore....
My comment garnered a lot of likes because, I assume, people agreed with me. Like I said, almost every comment on the entire thread was in the same vein as mine. I really hoped the Turkey would see it and respond to me. To apologise and realise his words hurt. Even if they had come from a place of misunderstanding. It was obvious to me that he had struck a nerve with many people and it was, to little ol me, actually quite heartening to see so many people on the side of sex workers, defending her job, her medical history and hoping that she was okay after her experience.
But that didn't happen. Nope.
I woke up this morning and saw that the Turkey had made a comment on the post. Ooh! Yay! Little ol me and the rest of the commenters had maybe got through to him! One more converted to the “let's not make fun of sex workers for just doing a damn job” pile. Yay!
Nope. Well, not really anyway.
Turkey went on the defensive. He edited the original caption and wrote a post chiding everyone who had commented on whorephobia because we were all mean and horrible and how dare we take something he'd said and try and twist it. All he'd meant is that because Duggar was sleeping around his wife should be tested. Which in itself is a valid comment. But, and it's a huge but, considering almost 100% of the comments had “taken it that way” and considering the fact that I see these sorts of “dirty STI whore” comments almost daily... Well, I'm sorry, Turkey, but your comments were taken on face value and that face was one of derision and whorephobia.

The other thing that pissed me off was the fact that, although every other comment mentioning that his caption was not cool is still there, he deleted mine. Gone! Zip! See ya later! I only happen to have the print copy of it because I had copied it onto my clipboard while Facebook was being a bitch and I wanted to have a copy in case it didn't post properly the first time.
Why delete it? Why just mine? The only thing I can think of is that mine is the only one who actually attempted to educate him on WHY it was offensive for someone like the Turkey to make such a bold and uninformed comment. I explained it in the words of homophobic misinformation. I made it personal to his experience. I tried very hard to not be rude, but to educate (while being pissed off, sure). I think maybe I struck a nerve. It's very telling to me really. And that makes it even worse. It really does. The fact that mine is gone but the others remain makes me wonder if his defence is all a bit bullshit. Too after-the-fact. He deleted my comment, my comparison to homophobic propaganda and perpetuation of stigma and hate, and then wrote his defence with the ending “Good riddance” to anyone who had even considered to have the merest possibility of a hint that he may have been a bit out of line with his comment...

Yeah. Silenced and deleted and chucked off the page.
You know what, Turkey? You became that guy. 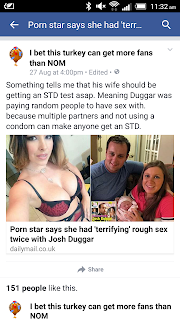 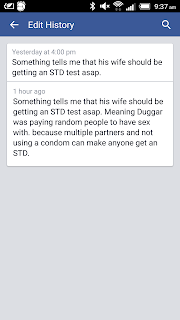 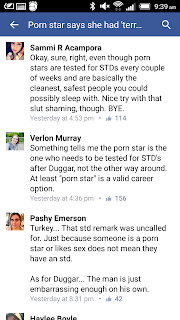 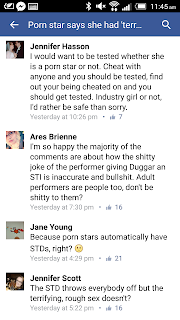 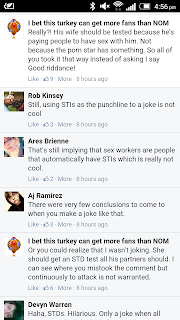 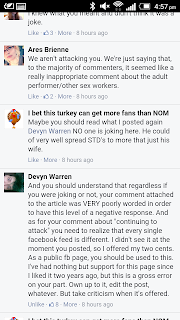 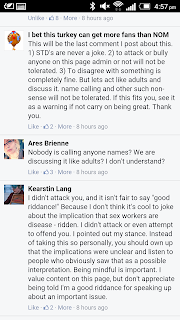 Posted by Deliciously Bad at 19:07

Email ThisBlogThis!Share to TwitterShare to FacebookShare to Pinterest
Labels: hate, I Bet This Turkey Can Get More Likes Than NOM, Stigma, Whorephobia