On the subject of whorephobia and of people refusing to acknowledge, respond or answer to their perpetuation of it (see last blog here), I bring you the Australian Red Cross Blood Donation group.

Blood donation is important. I have had friends who have needed blood donations, family members and acquaintances. According to the Australian Red Cross only one in thirty people donate blood, but one in three people will need blood transfusions in their lifetime.
This is sad. Really sad. Millions of people who need blood are going without because we don't have enough people donating blood.

For one reason or another they are unable to. Personally I think a few of these reasons or another are completely shit, discriminatory and outdated. But that's the way it is, and it doesn't look like anything is going to change any time soon.
There are four categories my friends who are unable to donate fall into.

If you take the “Am I Eligible to Donate” quiz on the Donate Blood website, The Red Cross asks you a bunch of questions about your history in order to determine if you are eligible or not.
Questions include are you pregnant, do you have low iron, your age group etc … And they also ask a question about “Risky Sexual Behaviour”.
I totally get that question. It's super important and valid. STIs in the bloodstream can be fatal, and the last thing you want to do is expose someone to those sorts of diseases and infections... It is absolutely imperative to sexual health and sexual practices to be safe and protect yourself and the people you are having sex with from infection.

You know who knows this better than any group in the world?
Sex Workers.
People who fuck for cash.
Know why? BECAUSE IT'S THEIR FUCKING LIFE AND JOB AND LIVELIHOOD!!
Sorry. I got a bit cross there... But for fuck's sake. This is something that irks me so much it should be shouted from every fricken rooftop of every fricken house.
This is their idea of “Risky Sexual Behaviour” 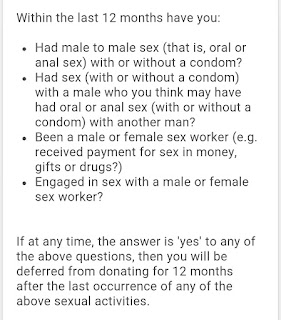 Sure, if you're the sort of person who goes out every weekend and has unprotected sex with people then I get why you can't donate. That's absolutely risky. But that isn't what they're saying at all.
Nope. It's only if you're gay, or the person you've slept with might be.
In fact, Red Cross, to single out and assume all gay men are like this is what is called “homophobia”. Say it with me, folks, H O M O P H O B I A.
No no, say the Red Cross. We aren't homophobic. Gay men can donate... They... They just can't have sex for a year beforehand.
Um...
What about the men in long term monogamous relationships?
What about the men who have casual sex but use protection every time?
What about the fact that AIDS IS NOT A GAY DISEASE?
Nope. Doesn't matter. Red Cross don't want your tainted homo blood. Eew!

Next we come to the whorephobic discrimination against sex workers. Sex work is lumped in with “Risky Sexual Behaviour”. Yes. Risky. Because, you see, money makes it bad. You can go out and fuck a hundred people in a week... But the minute money exchanges hands, well you're probably diseased and icky. They also like to lump in “drug use” in their whorephobia because hookers probably fuck for drugs and drugs are bad m'kay. Conversely, there is no question in there about getting high as fuck on E with your friends and heading off to a nightclub and fucking a bunch of people in the toilets...
Because that's okay. You weren't, you know, paid for it.

This blatant whorephobia comes regardless of reams and reams of facts and statistics that show and prove that among any demographic Australia Wide, Sex Workers are of the lowest percentage of STI carriers in the country.
Here are just some examples of websites, articles, research papers etc that prove just how wrong the Red Cross are in their discrimination:

Interestingly and very tellingly every single comment got a response except the ones asked by sex workers. EVERY. SINGLE. ONE.
Don't believe me? Here is the link to that thread:

They used their tired old homophobic excuses re the gay men. They explained about the risk of mad cow disease within people who had lived in the UK during those years. They even responded to every single bigoted comment regarding their biscuits... But the Sex Workers have nothing. Not a single comment, explanation or excuse.

Sex workers have provided links to back up their statements about the lack of STIs among them and their peers. They have asked articulate, intelligent, well argued questions.. But nothing.
“I would donate but now you're Muslim dogs” gets a reply but “Please explain why you won't allow a group of people with proven safe and healthy blood to donate?”.... Crickets....
I too have reached out to them on Facebook and on Twitter to absolutely no avail. They just will not respond. At all. Zip. Nada. Nothing.
This is absolutely unacceptable.

I call on every sex worker in Australia, every sex work ally, every friend or partner or family member of a sex worker to get on board and start asking the questions that demand answers.
Why, when we are statistically proven to be of lower risk than almost any other Australian group of people in any state or territory, are sex workers not allowed to donate much needed blood to save lives?
Why?

I'm not holding my breath for an answer...
(EDIT: How interesting. About twenty minutes AFTER this blog was published the Red Cross decided to reply to ONE of the comments on their Facebook thread. One. They said they had to check because they didn't know the answer... I call BULLSHIT! I call stalling because today their Twitter is blowing up. I say revoke your dumb policy now and stop blowing smoke up our goddamn arses. We usually get paid for that. We ain't letting you get away with it for free) 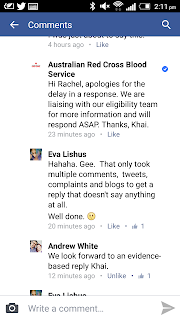 While we're waiting here's some examples from that thread... 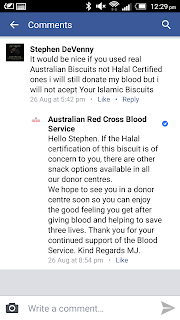 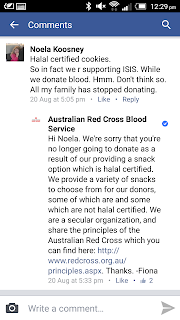 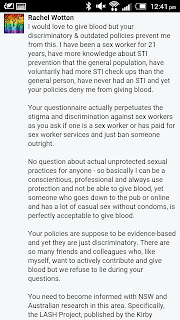 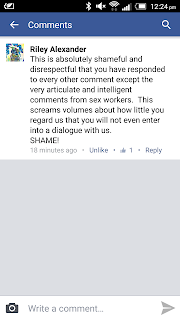 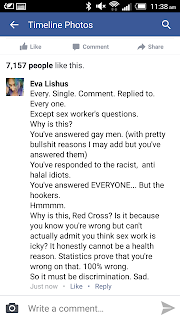 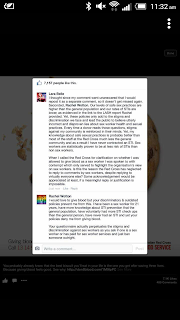 Posted by Deliciously Bad at 20:34