I love new toys! I love new designs! And I absolutely love new toys with new designs that step outside the box...  So... Let's talk about this new product that's been doing the rounds as the Latest-And-Greatest-Most-Unique-Vibrator-Ever-Made-Absolutely-Guaranteed-To-Make-You-Orgasm-Every-Time wonder toy: The Womanizer. 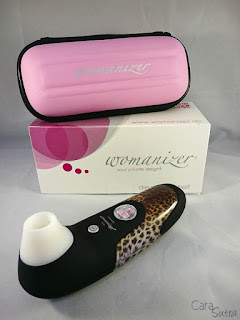 I've seen the advertising for this toy, I've read the marketing, I've seen the testimonials and the rave reviews. They claim this toy will give you guaranteed orgasms. Not only that, but if you buy it directly from the Womanizer website they offer you a GUARANTEED ORGASM OR YOUR MONEY BACK!! Now I don't need to tell you that's a hell of a claim to make, and one that set my curiosity into overdrive. 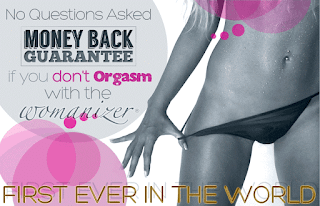 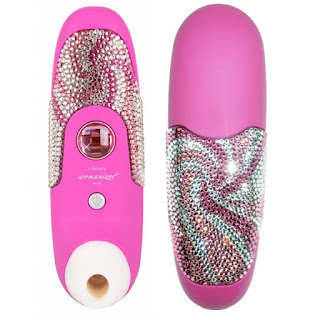 It has a super sturdy and discreet case to store it in (imagine a heavy duty, zippered sunglasses case), and comes with the handbook, a USB charger and a spare “tip”.

So just what is so special and unique about this toy? What is it that sets it apart from just about every other clitoral stimulator in the world?
Well that's actually kind of a cool thing. Whereas most vibrators rely on direct stimulation to the clitoris via vibrations, this works differently. This toy works by stimulating the clitoris without even really touching it at all! I know right? What does that even mean??
Well here's the thing, the tip bit that I mentioned comes with a spare, is like a little cap you place over your clitoris, and then, when the toy is on, it works with this sort of gently humming and sucking mechanism that stimulates the nerves and the area around the clitoris and thus brings you to orgasm.

Now I have to say I was sceptical. Like I said at the start, I really like a good strong buzz to get my motor running and simple hand tests with this toy didn't seem to cut the mustard. Like yes, sure, I could feel it sucking on my finger tip and gently buzzing, but it just didn't seem to have the oomph I usually rate so highly. It was also a little bit loud when turned up high and I thought with the gentleness of it and the noise on top of that I would probably get distracted too easily and it would be a fail... But in the name of science I took the plunge and brought it to bed with me.

Let me just say this. I ALWAYS recommend testing the buzz etc of a toy before you buy it because it's important to know just how strong or weak or hard or soft it will be... But in the case of the Womanizer this tip kinda goes out the window. The feeling of it on your clitoris, versus the feeling of it on your fingers, is so different I can't really describe it.
The other thing that surprised me was as soon as you have it over your clitoris and the tip is sealed, you can hardly hear it.
This thing is deceptively strong. But in a totally different way! It's hard to really explain how, but I'll try it with one of my famous analogies. Have you ever had a mozzie bite that you can't itch directly because it kind of hurts, but if you itch around it it feels better? This is kind of like that, without the hurt. It really is kind of remarkable. To every girl who has ever written me a letter asking me how they can get that super buzz feeling without the pressure or direct contact with an over-sensitive clitoris... This is for you. It's gentle enough that it won't cause any stress or pressure to your most sensitive bits, but it works in such a way that the whole area of your clitoris is stimulated and aroused. I was able to bring myself to orgasm every time I used it, and yes, even made myself have a couple of multiples as well. This (multiple orgasms) is something I'm pretty good at doing anyway though, so I'm not going to say it will work as well for everyone.
It has six speed settings, but no rhythms or pulses, and it's so easy to use with a little “on” button and a big jewelled button to push through the speeds. It's also pretty easy to clean too. The silicone tip is removable for easy cleaning and it comes with a spare just in case. The toy itself isn't waterproof so don't run it under water to clean it.

I will say, however, there are a few things I'm not loving about this toy.
Firstly the way it looks. This is just personal and of course everyone is different, but I just think it looks tacky. I'm not into bling or pink or things that look like they came from the Barbie Dreamhouse and this is all those things wrapped up in one. Even the ones that aren't pink have that “girly” look to them and I wonder if it will appeal to anyone over the age of 30.
Secondly I don't like the name. Not only because every time I read it I start singing Britney in my head, but because of the negative connotations around the word “womanizer”. Women are constantly told to avoid players and womanizers. They're bad for us. For our self esteem. For the sisterhood... And so I cringe a little.
The final thing I'm not a big fan off is the fact that once it's in place and sealed and the buzz is going you can't move it. If you do you break the seal and the intensity goes away. I felt a little bit stiff using it for the first few times and I really can't imagine using it as a clitoral stimulator during sex as there would be far too much concentration on keeping it in place and not enough on the actual enjoyment. But again, that's just me.

Overall I really rate this toy. I highly recommend it to women who are curious about sex toys but don't want one that looks and feels too confronting. I know many women find a direct buzz on their clitoris far too much to bear too and this eliminates that completely.It's cute and pretty and actually works, so if you're into cute and pretty, I think you'll love it.

Quite a few people have mentioned the price to me, as it is one of the most expensive toys on the market right now and have asked if I think it's worth it. To that I say, for the right person, yes, for a number of reasons. The main one being the amazing ability it has to stimulate you quite vigorously without being vigorous itself. If you feel like you're too sensitive for direct clit stimulation, but really want to experience the tingling sensations of a good clitoral orgasm, then I definitely would suggest giving this one a go. Yes it's expensive, but I don't think it's a rip-off.

For it's innovation, uniqueness and what I believe could be a revolution in more women learning how to pleasure themselves, I give this toy a 7/10. It loses points for tackiness and not being able to be taken into water.
For the best priced Womanizer's in Australia, you can buy them HERE! 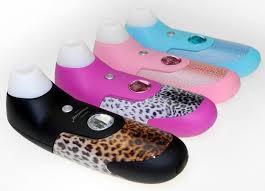 
Happy Buzzing, my friends!
Posted by Deliciously Bad at 22:41