The Problem With ProLube... Or, Do You Even Vagina, Bro?

Okay, folks... Strap yourself in cos we're going on a helluva ride!
This one is a doozy! It's got everything you could hope for in an adventure ride. It's got twists and turns, false claims and weird science. It's got insults and lies and, best of all, MAGIC!!!
(It also has a shit load of links and screenshots so bear with me),

I'm also not the first person to blog about this.
There have been quite a few others as concerned as I am including @EmmelinePeaches and her great blog, @DangerousLilly in her Tumblr, and @cbpolis who uses her blog on this topic to show how and where you can complain.

By now, if you're a follower of mine on Twitter, you're probably aware of the company "Use to Believe" and their magic wonder lubricant, ProLube. I was alerted to it by a good friend and gorgeous sex worker @NtyNikki and, after having a look at the website and reading it all for myself, I decided to take to the mean streets of Twitter and use my connections within the sex industry world, the sex blogger world and the science world to question, investigate and highlight the very big concerns I have about this product.
But first, if you're not aware... Let me tell you about ProLube...

<insert sarcasm font and put on your tin foil hats>
ProLube is so amazing that you won't even be able to believe how amazing it is unless you use it. It will totally science the hell out of your vag. So much so that one application will have you lubricated all day and, just a mere ten hours after that you'll be way horny and aroused as fuck because our magic lube is also a magic-lady-hornifier. Ooh and it will totally clear up your pimples and that nasty vagina-smelling vagina smell girls have. It will make all your period cramps totally gone - except for the fact that you shouldn't use it during your period - and, most super awesomely and magically of all, it will protect against STIs including HIV (but only if you use a condom.... and, like, if you do get HIV or something while using it then it's totally the condoms fault and you should sue the condom company). And it absolutely, totally, 100% works. Honest! I mean sure, there are no clinical trials or evidence or independent testing or scientific backings or any of that pesky “proof” people like to go on about because that's unnecessary and anyway, for safety reasons we decided not to do any tests. You just have to use it to believe it. But no, I'm not going to tell you what's in it. You're far too dumb to understand how the ingredients will work anyway, and, like, you totally wouldn't believe it anyway. It's like magic. 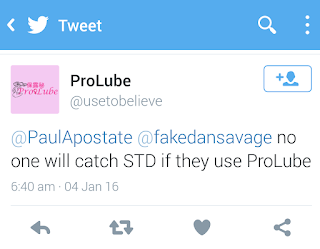 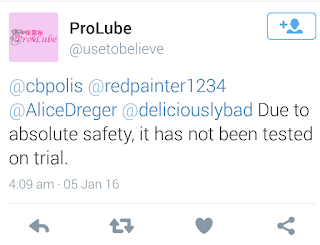 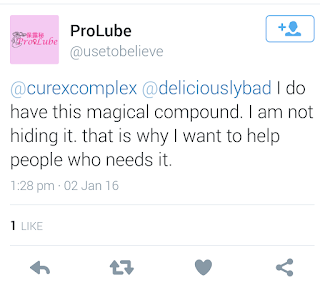 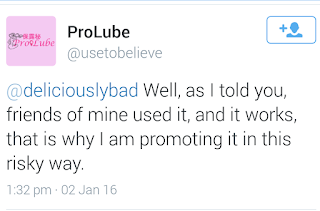 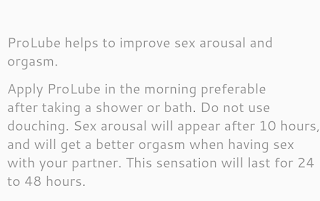 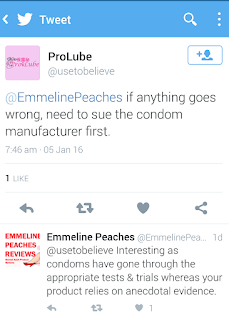 Seriously. You cannot make this shit up.

Out of all the strange claims and bizarre logic and weird science, one thing this dude has correctly surmised is that I am not a scientist. He's right. I'm not. I have a pretty crap brain for it actually... So, when he finally (after days of being asked by many people) posted this link to the "Science" and told us that it was “too advance” I agreed. 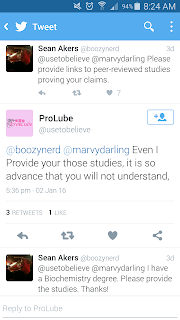 Although, as you can see, he underestimated the folks of Twitter... And also my gorgeous friend who shall henceforth be referred to as Bec the Sweary Science Bitch - @bklistingblog - (seriously, she's awesome. Think SciBabe with a Mauritian tilt and an obsession with Star Trek). Bec is not a nuff brain like me. She is a certified, legit, all powerful sciencer with bachelor degrees in Science, Biomedical Science and Health Science. She is a clinical innovation specialist with a focus on global health and microbiology and is an all round smart cookie who knows her shit when it comes to the science of germs and diseases and how all that shit works.
So I sent it to her.
After she finished laughing and asking me “what the fucking fuck, is this dude actually serious, holy fuck what?” She sent me a tell-me-like-I'm-five summary.

For the TL;DRs – It's bad science. It makes no sense. It's guesses at best, and lies at worst... Oh, and according to a couple of other sciencer Tweeps who read it too, a lot of it also seems to have been stolen from other writers, cut and edited, and then pasted together with perhaps ProLube itself. 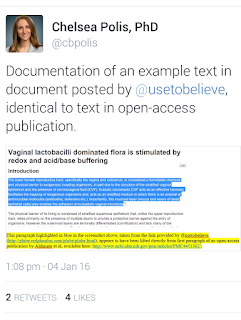 For the rest, here are the screenshots of her awesome sciencey summary and notes to the author of it: 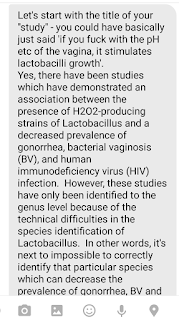 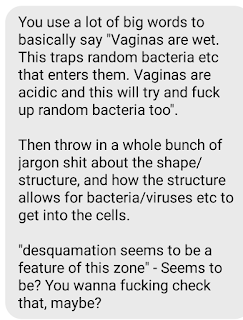 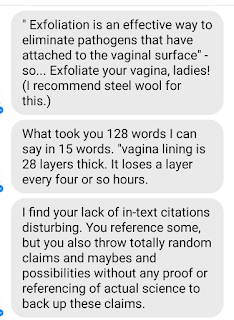 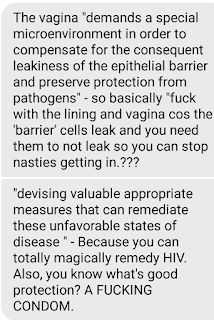 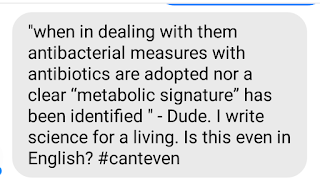 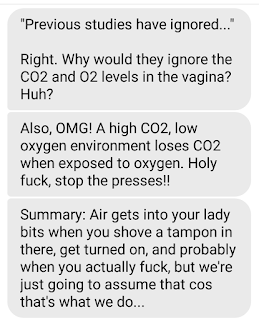 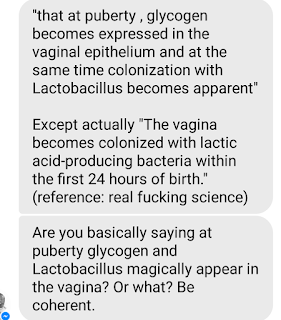 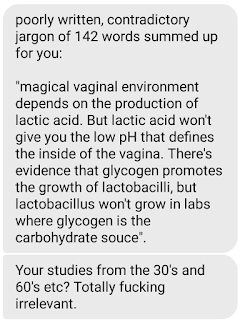 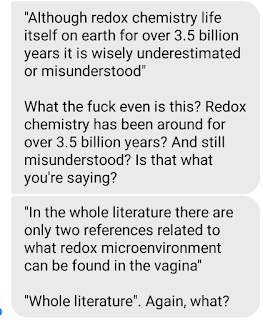 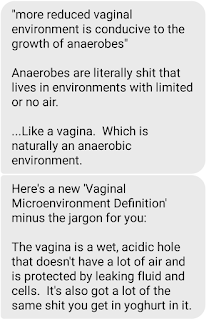 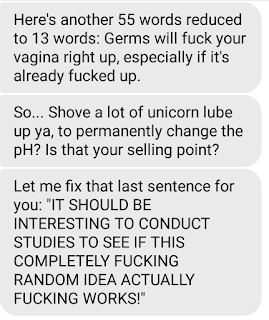 But enough of the science for now. We have already established I am not a scieney scientist, but something I am, and something I am very proud of being, is a sex worker. Yeah, it's been a while since I've done a job, but that doesn't matter. In my head and my heart I will always be a sex worker.
I am also a sexpert. I research, write, talk about and educate on sex, sexuality, sexual practices and sex work and one of the things that has really bugged me about this whole crazy ride through Lube Town is this company's hijacking of the Red Umbrella symbol and the incredibly ignorant and condescending marketing towards sex workers.
For those who are unaware, the red umbrella is an international symbol of sex worker solidarity and respect. It is special. It is important. And it is ours. 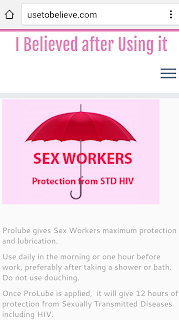 What this person (or persons... who knows how many whackjobs are involved in this scheme) fails to understand, and refuses to acknowledge, is that sex workers not only don't need this help, they also do not want it. Outside sources (read: people not associated in any way with sex work) who claim to want to help, protect and save sex workers are uniformly rejected and avoided, and often hated, by sex workers. They have no knowledge of our work, what we do, how we do, or why we do it. They have assumptions and guesses based on propaganda and whorephobia and, 99 times out of 100, they get it all dreadfully wrong.
This was evident when Mr ProLube was asked why he was marketing to sex workers. His reply? Basically, because sex workers have lots of sex with random people, they don't know who, or what infections, said random people might have. 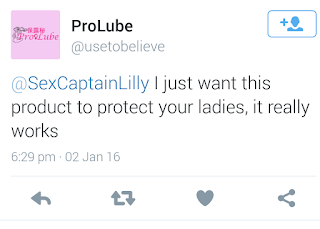 Well duh. That's not fucking rocket science. But, the thing is, we already know this, buddy. We aren't fucking idiots.
The fact of the matter is that sex workers have one of the lowest rates of STIs than ANY OTHER DEMOGRAPHIC.
Do you know why this is?
Because sex workers are very fucking aware of the risk associated with the work they do and take many many precautions against this. Sex workers are masters of condoms and masters of STI spotting. They can tell the difference between a milk spot and a genital wart. Between eczema and herpes. They can tell if that crusty shit on a penis is just that the dude hasn't washed properly, or if he has gonorrhoea. They. Know. Their. Shit. They are regularly tested and regularly updating their knowledge on all thing sexual health. Because of this, sex workers are the first people who will jump up and down with damn good authority and tell you there is no way, without any proof, scientific data, clinical trials and independent testing and reviews, that they will believe your lube can prevent HIV and other STIs, or waste their well-earned money buying it to find out.
And what about sex workers in countries and places where the education on STIs and protection may not be as prevalent as it is in Westernised places like Australia and the UK etc?
Well they are precisely the people who need to be warned against this stuff. These are women (yes I know not all sex workers are women but this is marketed as a female lubricant) who will listen to this woo-science and believe it. These are women who will stick this lube inside them and believe they are safe from disease. These are the women who will die because of this false advertising and irresponsible bullshit.

Something sex workers will also tell you, and everyone else they can get within earshot, is that despite your insistence that it's true, and despite your pretty little web page telling us so, there is absolutely NO CURE FOR HERPES!
Yes, you heard me right, folks. Mr ProLube also has a product that he claims (again without any proof or science backing or trials) will cure herpes. 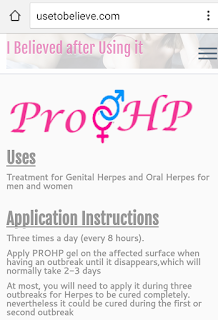 He says someone he knows used it once and their herpes magically disappeared and they were cured (but for best practices you should apply thrice). 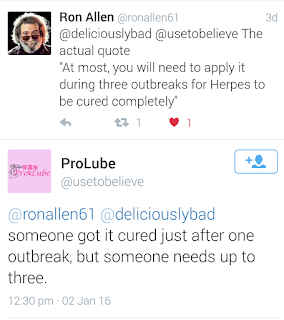 This is impossible. There is no cure for herpes. There just isn't. There are creams and pills and stuff that can help lessen your outbreaks and maybe even prevent you from getting an outbreak at all... But there IS NO CURE. The herpes virus is with you for life. It is highly contagious and completely incurable.
The fact that this company is making these outrageous claims is worse than just irresponsible. It's deadly. I urge every single one of you reading this blog to report them. Not just to Twitter, because although that may disable a platform of theirs it won't actually stop them from selling their nasty magical lie lube, but to the relevant authority in your country. The TGA. The FDA. Even The ACCC or relevant Consumer Affairs board in your country. 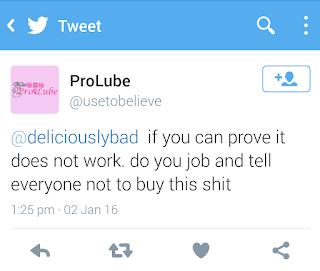 Oh, don't you worry, Mr ProLube. That is exactly what I will do. Because this shit is bad. And, quite frankly, I'd like to see it die a horrible death before someone who believes their lies does.

Posted by Deliciously Bad at 15:36