As most people who read my reviews know, I am a buzz girl. A clitoris chick. An outie. While I don't mind vaginal and G-Spot stimulation (and am slowly learning to get the best out of it) when it comes to solo play and the best way to orgasm, I always default to the buzz.

I own a couple of wand toys and have always been impressed with the strength of the vibrations so I wasn't expecting anything that new or exciting with the new wand-like toy, The Palm Power Massager, from the makers of Swan. Boy, was I wrong.

This toy has buzz. Serious fucking buzz. Even the lowest setting is stronger than the fastest setting of some other toys I own which makes for some seriously good, toe-curling orgasms. It also plugs into the mains so there are no batteries to change or charging times to wait for before you use it. It is controlled by a single button which you push to turn on and then hold down to increase the power and then a single push turns it off. You can't move up and down through the speeds which can be a bit frustrating, but overall it is really simple to use and doesn't get confusing with all different buttons and pulses and settings like some other toys can.

One of the cool things that sets this toy apart from other wands are the interchangeable caps you can buy as extras. The toy comes with a small rounded head which can be popped off and replaced with four different shaped and sized caps for other functions. The two different packs (containing two heads each) are the PalmSensual and the PalmBody attachments.

PalmSensual contains the Palm Below cap which is a G-Spot stimulator attachment and the Palm Dual that works in the same way as a rabbit vibe, with an insertable piece and a clitoris stimulator on the side. 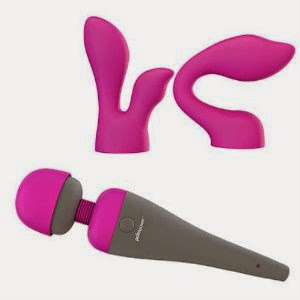 The PalmBody attachments are directed at other parts of your body that may need massaging. The Palm Finger has two prongs set close together for more localised muscle manipulation, and the Palm Arm has them further apart and is designed to run along your arm or leg for a muscle massage. These two caps really do work well for back, neck and arm massages, but can also be used as sex toys for both the female and the male. Seriously, you can stroke the penis between the two prongs of the arm massager and get a fantastic sensation (according to the husbandman). 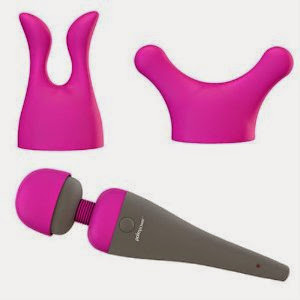 All the caps are made of silicone and, although the wand itself is not waterproof, the caps are all very easy to take off and wash.

I would say this toy ticks all the clitoris boxes and can even, after a few orgasms, be a bit too powerful for even me to handle (lucky it takes a while to get to that stage). But I love it. It has a permanent spot on the power board next to my bed and has made my Hitachi almost redundant.

Posted by Deliciously Bad at 00:30